Jerry’s Cafe is a small diner in South Kansas City, Missouri, located at 1209 W 103rd St.  Their hours are 6 AM – 3 PM every day but Monday.  Jerry never has a case of the Mondays. They have no website but do offer a Facebook page.

Hello again! Good day to all readers of this fine establishment.  I would like to announce the resurrection of a sadly dormant hobby of mine.  I would like to thank Alisha, one of my favorite coworkers, for begging me to do another Panclog.  I am also truly thankful for the constant support from Stephen and Brent to eat my favorite food.  Please enjoy this very new and tasty Panclog!

My wonderful partner on this edition is the one and only Brent Morgan!  You may remember him from his fine work on Panclog #14!

Location/Environment: Stepping into the small café you can feel a false edginess, beginning with their menu that displays a skull and crossbones made from bacon and eggs, to the caricature of Vincent Vega (more like Vincent Egga, am I right?) and Jules Winnfield from “Pulp Fiction”.

We entered the restaurant on a chilly morning and quickly took the largest table available to us.  With 5 of us, this was a necessity. The entire place could maybe hold just over 50 people.  That being said, you may have to wait a while for a table. The table we chose was right up front next to the door and was labeled the social table.  The idea here is that this table was intended for open seating and one could expect to make a new friend that morning.  Although I like this idea a lot, we were not able to make a new friend as no additional person sat with us. Granted we pretty much filled the table.

Sitting by the door does provide its challenges, as a chill wind blew across our table every time the door was opened.  This isn’t a big deal, just something worth noting, as it might take away from your experience.

Service: While our server was very nice, the service at the restaurant was a little slow.  Judging from the staff and the number of patrons I would suggest this was the result of being slightly understaffed that morning.  Another downside to the service is that not all of the food items came out at the same time.  One of our breakfast buddies ended up waiting a little longer than the rest of us.  Good thing he was able to pound away the remainder of the cinnamon rolls.

Menu/Selection: Jerry’s is truly a dive.  They know how to do greasy and they do it well. They have full plate entrees or side items depending on your hunger level.  They also have lunch options if you are one of those types of people.

Breakfast Appetizers and Coffee by Brent!

I enjoy restaurants that employ an eclectic array of coffee cups showing a variety of designs.  My coffee cup must have belonged to Carl at some point, as that was the name printed on it. Reading the compliments on the cup about Carl leads me to believe that he is a pretty decent guy.  My compatriot on this Panclog, had a festive, holiday themed mug (at least if I remember correctly).  The contents of my mug, straight black coffee, left a little to be desired.  The coffee wasn’t bad, but it wasn’t good. When going to a breakfast place I usually hope to get a cup a coffee that is better than I can make at home.

We ordered a couple cinnamon rolls to be shared amongst the six of us. Each roll was significant in size and was easily shared by all of us.  In general, portion sizes were large at Jerry’s.  The cinnamon rolls oozed a cream cheese based icing and were covered in melted butter.  Too much butter for my taste in this circumstance.  If they added a little less butter the roll would have been terrific.  Like the coffee, the cinnamon roll was good, but they missed an opportunity here. 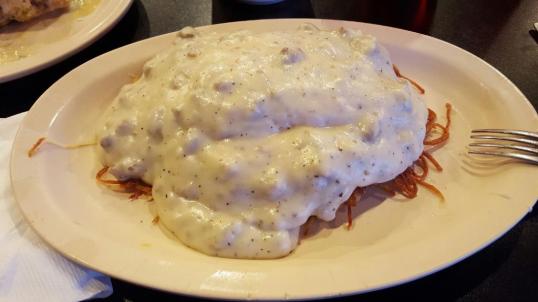 For the “main course”, as if the cinnamon rolls were not enough, I ordered the Big John.  Actually, I ordered a half sized Big John.  The half size portion was big enough in my opinion and I cannot imagine being able to eat a full sized order.

I enjoyed the Big John quite a bit. The hash browns were crispy, much to my liking, and the eggs were cooked well.  Even though the sourdough toast was a bit difficult to cut, it did add an interesting flavor to the whole concoction. The cheese, while visible when eating, didn’t augment the flavor as much as I originally expected.  The dish would have been fine with or without the cheese.

The sausage patties and gravy really tied the dish together. The toast and hash browns provided a solid platform for these two items. And, in all honesty, how can you go wrong with a good, tasty country sausage gravy.  While I wouldn’t recommend this item every day, I would definitely recommend it when you are open to something a little heavier for breakfast.  The half sized order of the Big John was a lot of food, so be prepared when ordering the full size Big John. 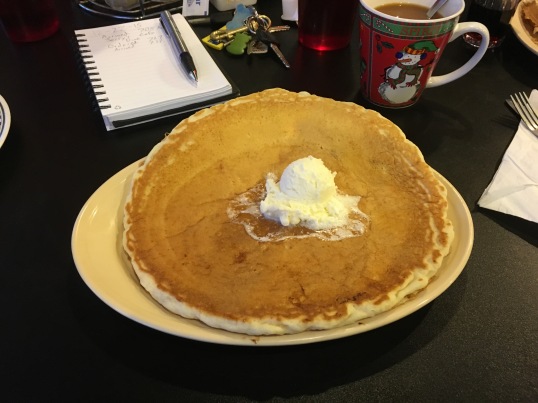 Although you can not see the Reese’s Pieces in this picture, I can wholeheartedly declare that those little pieces were inside of this tasty cake.  I do not know if you have read my work before, if not you will soon learn that I can not understate how much I appreciate the act of putting a pancake topping inside the batter.  It is a simple act that completely transforms the quality of the pancake.

That being said these pancakes had the perfect amount of Reese’s Pieces in them.  It would be very easy to skimp on the candy bits and make more profit.  You know, work that revenue down to the bottom line and do more accounting things.  Jerry could also get crazy with his candy and make this pancake more Reese’s Pieces than cake.  That would be a tasty disaster. The Reese’s Pieces melted into the pancake to create a lovely soft texture of delicious bread, peanut butter, chocolate, and little bits of orange, yellow, brown, and red.

I would like to take this moment to announce that Reese’s Pieces is pronounced so that Reese’s rhymes with pieces.  I have heard way too many people pronounce Reese’s with a very hard E sound.  REESEES.  That is gross.  Don’t do that. Enjoy this video to forget my rant.

Back to the pancake talk.  Jerry loves butter. This love is on display when you take a bite of the giant cinnamon roll or when you take a look at any pancake served in the place.  I think this butter love is great to an extent, but Jerry crossed the tragic yet important butter line of 1947. When Albert Einstein discovered the perfect butter serving in his lab.

I was a big fan of the syrup vessel at Jerry’s.

A squeeze bottle for syrup is lovely.  The plastic ramekin was filled with warm syrup.  But we can all agree that that little ramekin is never enough for a pancake, let alone a frisbee-sized cake.

The pancake was a great portion size.  I kinda feel lame saying I only ate one pancake.  But then I slap on the frisbee-size and people stop calling me a lame pancake eater.  IN YO FACE, JERRICK!

Price: Jerry’s Cafe is a great bang for your buck. You get some big dishes for some small change.

Overall: (Brent) I would certainly go again, but would not necessarily make it a regular breakfast spot.
(Jared) Due to the large portions, I will definitely be back again when I need to eat too much.  I  may ask for less butter in the future.  I am glad we arrived early because people started to wait for tables around 7:45. I do not believe this spot is worth waiting longer than 20 or so minutes.

Send recommendations and feedback to the Panclog’s Twitter or thepanclog@gmail.com