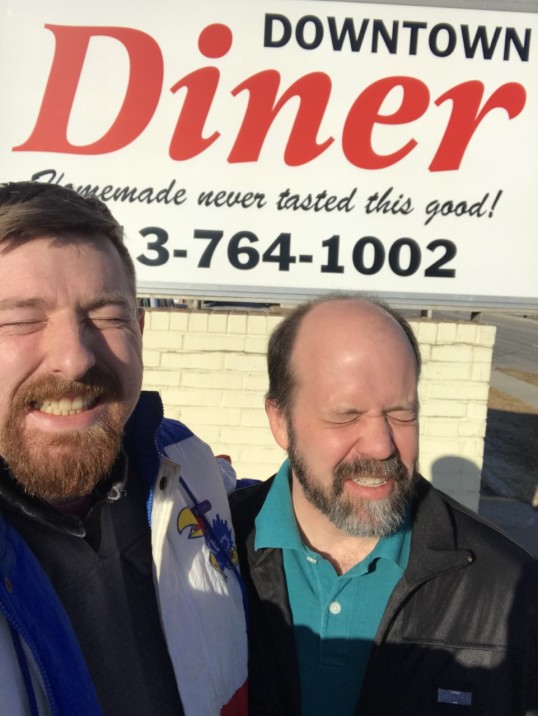 Location/Environment: Downtown Diner is right next to the Olathe courthouse.  Courthouses are almost always surrounded by a certain type of business. That business is bail bondsman.  Downtown Diner shares a parking lot with Shane’s Bail Bonds.  The environment is one of an old Chinese restaurant. The building once belonged to Ping’s Chinese Restaurant. The dining room is divided into 2 sections and a bar with seating area.

Service: Service at the restaurant was interesting although it was rather slow.  Our server spent a good portion of the morning chattering away with family in China over skype. It seems her mother or mother-in-law was facing surgery and she called to help provide some cheer and comfort. We hope everything turned out well for her family. The gregarious server did interact with us in a fun and open way throughout the morning. She even impelled Brent to sign up online at the DMV so that he would not have to wait too long once there.

Menu/Selection: Downtown Diner has a pretty standard diner menu.  They boast a menu with 16 different omelet varieties, 8 egg benedict varieties, and a burger called “Heart Stopper.” The heart stopper is 2 grilled cheese sandwiches as buns, double burger patties, mozzarella sticks, onion rings, and of course bacon.  So i’d say they have a bit of variety, wouldn’t you? Let’s stop talking about what we didn’t get and dive in to what we did:

My panclog pals, I do not know if you know this about me, but I am a big big fan of disc golf. I have been playing regularly for 3ish years now.  I have a good pal at work, Matthew, who invited me to play randomly once and we have been playing at least once a week since. Rain, snow, or shine we get to playing sometime.  Why am I telling you about this lovely hobby of mine? It’s because if it weren’t for disc golf, I would not know about Downtown Diner. We were playing the Lakeside Hills course in Olathe and our coworker at the time, Karla,  said we should grab breakfast after the round.  She questioned if any of us had tried Downtown Diner. None of the group had. She said we have to go. I never object to breakfast. A Peanut Butter & Jelly French toast later and I knew there had to be a panclog review on this fine establishment.

Let’s chat about the toast from France.  I tend to not choose french toast over the other breakfast breads.  I think I would rank the hierarchy of breakfast breads as followed:     1. Pancakes. 2. French Toast. 3. Waffles

I think I shy away from French toast because I find pancakes more filling and I have been scorned by very egg-y toast before.  I must say the french toast in the picture below are quite delicious. I mean, just look at them. 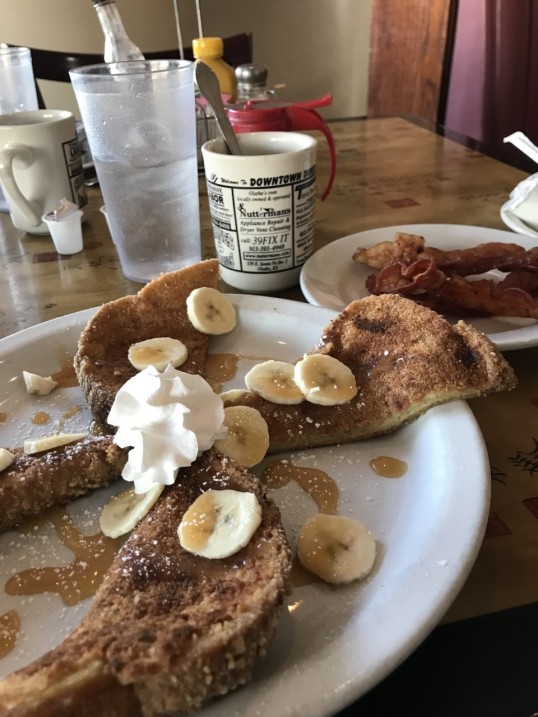 First I will say that this french toast did not need the bananas nor caramel to be some of the best french toast that I’ve ever had.  This toast does not seem to be cooked on a griddle or flat top. I may be wrong, but I believe they are shallow fried.  I’m sure that’s a thing. The banana and caramel did not enhance the meal above and beyond.  It was simply some nice fluff.  Next time I will not be choosing these add-ons.  I did not need any syrup for the french toast. The caramel and whipped cream added enough moisture to start that critical breaking down of the structure of the french toast.  Bacon is always a great pairing with a sweet breakfast treat. The crispy, peppery flavors of bacon reminds your mouth not to go all-in on the sugary goodness of the french toast.  Sometimes you just have to put your taste buds in their place.

I will absolutely be having a meal at Downtown Diner again.  I sure hope it is busier next visit.  This place deserves business.

I got coffee, bacon, and the caramel banana french toast with tip for $16.79.

I’d like to recommend you listen to Paul Simon’s “You Can Call Me Al.” It is just a beautiful upbeat song.  Plus it is a nice mystery. Why is Paul wanting to be called Al?  If you find out please let me know.

Stepping into the Downtown Diner in Olathe, KS is quite a striking experience. The initial impression the establishment provides is one of a gritty, old, experienced diner. From the inside out you feel diner’s age as it permeates every aspect of the restaurant. I expected to see a couple truck drivers sitting at the counter swapping stories and lies about the road with a loud cook in the back slinging hash.

Upon closer inspection though, you notice the accouterments of a Chinese restaurant. The tables are stamped with various logograms that I assume are hanzi. The diner also displays other artistic elements of East Asian stylistic origin. This diner forces a fusion of cultures that is absolutely delightful. Common ground can be found between art, décor, and, most importantly, breakfast.

We entered the Downtown Diner to a space devoid of customers. This concerned me a little thinking that there is something that others know that I do not know about this place. Sitting there for a bit, Jared wondered if we would complete the entire breakfast buddies experience without another customer entering the building. We came awfully close to seeing this happen, as we made it all the way through eating our meal before another soul showed up.

The menu options offered are all pretty standard. As we perused the menu our first cup of coffee was delivered. Their coffee was fine. Nothing special. Nothing earth shattering. It simply tasted like a cup of Folgers. This isn’t a bad thing, just not an exciting thing.

I ordered French toast for breakfast, which caused our server to emphatically say, “Our French toast is the best!”

“Bold words,” I thought to myself as I squinted back at her with a steely glare. Bold words indeed.

An order of French toast comes with a few side options: eggs (scrambled of course), choice of meat (I went with sausage), and choice of potato (hash browns). The eggs and sausage were pretty nondescript. I would not go so far as to say flavorless, but the word bland comes strongly to mind.

I had high hopes for the hash browns though. Getting hash browns at a seedy diner is one of my favorite things, because they are usually fried crisp with a hint of onion, and a fair amount of black pepper. These came out slightly crispy but I could not taste much in the way of seasoning. To make matters worse, the hash browns were slightly undercooked and soft in my opinion. I did share them with Jared – I wonder if his opinion differs.

The French toast was excellent. This tasty treat lived up to exactly what our host said it was. Downtown Diner makes amazing French toast. The French toast had a distinct sweetness to it with a hint of cinnamon. The toast actually had a streusel like crust to it. Not an overwhelming amount of streusel but enough to add an interesting texture. Speaking of texture, the toast had a pleasant crunch on the outside and a soft tender center. It is usually necessary to add something sweet to French toast like syrup or a fruit compote, but Downtown Diner’s does not require it. All that is necessary is a little butter and you can experience a quick trip to joy.